This was Winchester’s Ultimate Plinking Rifle for 22 Long Rifle. They never made money on them. I frankly think that they did this for Ego reasons and I am grateful for it.

So if you want the absolute top of the line American made 22 Rifle. Then frankly I hold that this is the piece for you!

The Winchester Model 52 was a bolt-action .22-caliber target rifle introduced by the Winchester Repeating Arms Company in 1920. For many years it was the premier smallbore match rifle in the United States, if not the world. Known as the “King of the .22’s,” the Model 52 has been called by Field & Streamone of “the 50 best guns ever made” and by Winchester historian Herbert Houze “perfection in design.” However, by the 1970s the World War I-era design was showing its age and had given way in top-level competition to newer match rifles from Waltherand Anschütz; the costly-to-produce Model 52, which had long been a loss leader prestige product by that time, was finally discontinued when US Repeating Arms took over the manufacture of Winchester rifles from Olin Corporation in 1980.

During World War I Winchester’s management determined that production of the Model 1885 Single Shot would not be resumed in centerfire chamberings after the war, nor in .22 rimfire (the “Winder musket“) after existing Army training rifle contracts were fulfilled or cancelled. A new .22 would therefore be needed for the then very popular sport of target shooting; Winchester reasoned that returning soldiers would be drawn to the bolt action design with which they had become familiar. The rifle to be designated the Model 52 was designed from the ground up as an “accuracy rifle” — the world’s first production .22 to be so conceived. It was initially hoped that the Army could be persuaded to buy a bolt-action smallbore training rifle in addition to-or in place of-its existing contracts for Model 1885’s. Yet despite the outward appearance of its early versions, the Model 52 was never a military rifle, as the Army only purchased 500 of the initial production for trial, and never placed a bulk order.[1]

In February 1918 the company assigned designers Thomas Crosley Johnsonand Frank Burton to begin work on the new match rifle. Johnson had more experience with bolt actions than most at Winchester (which was then primarily a maker of lever- and pump-action firearms), having superintended production of the P-14/M1917 Enfield, as well as having designed a series of prototype military rifles known as Models A through D.[2] Johnson quickly obtained approval for a receiver based closely on that of the Model D, together with a barrel adapted from the .22 target version of the Model 1885. The stock from the receiver back was modeled on that of the Model D, which in turn had been derived from the Model 1895 Winchester-Lee; but incorporated a forearm based on a custom Single Shot target stock designed in 1908 by Winchester’s house marksman, Capt. Albert F. Laudensack.[3] 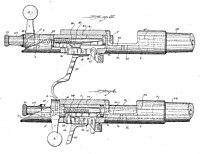 With the externals settled, Johnson and Burton turned to developing the action for what was now “Experimental Design No. 111.” Each built a prototype of his own design in Winchester’s Model Shop, both at this stage still single-shot. In the fall of 1918 the project’s requirements were changed to include a detachable 5-round box magazine: neither Johnson’s nor Burton’s original bolts would work with a magazine feed, but a combination incorporating elements of both proved highly satisfactory. A finalized repeater prototype was made in April 1919 and taken to Washington where it was evaluated by Lt. Col. Townsend Whelen of the General Staff, Director of Civilian Marksmanship Maj. Richard LaGarde, and Gen. Fred Phillips of the National Rifle Association, who were enthusiastic–—- although guarded about the prospects of a Government contract.

Whelen further recommended that pre-production samples be rushed out in time for the National Matches [1] at Caldwell, New Jersey that August. Six “G22R” prototypes were readied, and equipped five individual event winners and the victorious U.S. Dewar Cup team: the new Winchester was the talk of the tournament. Accordingly, full production as Model 52[4] was authorized on 11 September 1919 and commenced in April 1920 (using the lines and machinery originally installed to produce the P-14/M1917 Enfield).[5] 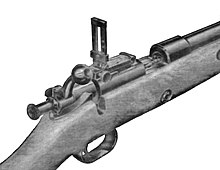 The Model 52 was a non-rotating, rear-locked bolt-action design. The Model D-derived receiver was cylindrical, bored and machined from a forged billet, and of substantial thickness. The bolt’s dual locking lugs were part of the rotating bolt-handle collar, which provided a camming action to seal the breech on closing and extract the spent case on opening. The bolt itself was undercut for the forward third of its length and rode on polished flats; a projecting lug at the front edge caught the top cartridge in the magazine. The bolt face was rebated so as to surround the case rim, and was chamfered to fit the recessed receiver ring. Dual-opposed sprung claw extractors were inlet into the sides of the bolt, providing controlled cartridge feed. A fixed blade-type ejector was located at the rear of the loading platform.

The original Johnson trigger mechanism, a two-stage or compound-motion military type derived, again, from his Model D, made use of a horizontal sear pivoted from the front; the trigger fit vertically through a pinned mortise in the sear and was shaped at the top so as to cam against the underside of the bolt and depress the assembly, releasing the firing pin; it was a cock-on-closing design. The one-piece striker terminated in a Springfield-like knurled cocking-piece. The wing safety was mounted on the left side of the receiver; when engaged it physically blocked the cocking-piece and cammed it slightly rearward, disengaging the trigger linkage.

The Model 52 went through many alterations over its sixty years. These changes were not systematic: improvements to the action, stock and so on were made on an ad hoc basis, and it is clearer to treat these alterations so separated rather than as “models.”

Note on serial numbers and sub-model or “Style” letter designators: It was Winchester’s practice to stamp each receiver with its serial number after milling and preliminary polishing, often weeks or months before the rifle was actually assembled. Accordingly, the alphabetic SN suffixes A, B, C and D were applied specifically to changes to the receiver forging itself, originally as an aid to factory workers: not to new designs of stock, furniture or even trigger mechanism if no change to the receiver was required. Other design changes might coincide in time with a receiver ‘submodel,’ or first appear in the same catalog: many commentators have been confused by this, talking about such things as the “Model 52B stock” which, strictly speaking, did not exist. From beginning to end the barrels were marked “Winchester Model 52” without a letter. Winchester catalogs and advertising literature did not mention letter designators until the 1950s.

Notwithstanding the foregoing, the Model 52D represented a comprehensive upgrade of the entire rifle.

Because at the time the Model 52 was developed many Army- and National Rifle Association-sponsored matches were restricted to “military-style” sights, and because Winchester had hopes of selling the 52 to the War Department as a marksmanship training rifle, Burton and Laudensack designed a folding ladder sight for the new target rifle. Designated 82A, it bore some resemblance to the sight on the M1903 Springfield, especially in its pivoting-base windage adjustment (albeit controlled by dual-opposed thumbscrews rather than the Springfield rack-and-worm). However, elevation adjustment was governed by a micrometer click-wheel for precision, not free-sliding like genuine military sights. The Burton-Laudensack helped Model 52 shooters sweep matches and set records throughout the 1920s, but more precise aftermarket sights took over the field and the increasingly obsolescent 82A was not offered after World War II.

Winchester catalogs from the beginning listed 52’s with sights by other makers; indeed, the buyer could specify any compatible peep on a special-order basis. The most common of these was the Lyman 48 series: the 48-J and -JH for flat-top dovetail-mount receivers, and the 48-F and -FH for round-top side-mount rifles (standard on the 52 Sporting Model). Other popular sights were the Lyman 525, the Wittek-Vaver 35-MIELT, the Marble Goss 52, and the Redfield 90 and 100. Late 52’s frequently were fitted with Redfield “Olympic” or “International” match sights.

The stock Winchester 93B front sight was an undercut blade type; aftermarket rear sights were typically paired with a compatible globe sight such as the Lyman 17A (except for the Sporter, on which a hooded Lyman or Redfield Gold Bead front sight was standard).

Barrel-mounted scope blocks were optional on early-production 52’s; they were made standard in 1924. These blocks were mounted 6.2″ apart, giving 1.2″ per minute-of-angle graduation at 100 yards. Originally the Winchester A3 and A5 as well as Lyman scopes were offered. In 1933 new bases with Fecker notches were introduced, using standard 7.2″ (1″/MOA) spacing; these were compatible with any normal telescopic sight. Long-barrel Fecker, Unertl and Lyman Targetspot were popular telescopes for prewar Model 52 target rifles, with Redfield and Bausch & Lomb becoming ascendant in the 1950s. The late-70s 52E had additional mounting holes drilled in the forward receiver ring.

Sporting Models were not factory fitted for telescopic sights (except by special order) until 1953, when 52C Sporter receivers (not barrels) were provided with tapped and plugged screw holes. However, many earlier examples were so equipped by private gunsmiths: nearly all the popular hunting scopes have been mounted at one time or another. A period-correct scope is not considered by collectors to detract significantly from the ‘originality’ of a vintage Sporter.

Around 1931 Major John W. Hessian, a friend of new Winchester president John M. Olin,[8] had a private gunsmith remount his Model 52 in a custom lightweight “sporting” stock. Olin was so impressed that he ordered the development of a 52 Sporter as a production model, which made its debut in 1934.

The Sporting Model had a lightweight 24-inch barrel and an elegant gloss-finished stock of figured walnut with a slender, tapering capped forearm, pronounced pistol grip, high comb and cheekpiece, and fancy checkering. The action was identical with contemporary[9] target models, except that the receiver top was left round rather than milled flat. Weighing only 7-1/4 pounds, it came with Lyman 48-F aperture sights standard, and retailed for the substantial sum of $88.50 (the equivalent of nearly $1520 in 2012).

The Sporter was in all respects a deluxe rifle. While Winchester already had a reputation as the Cadillac of American arms manufacturers, the 52 Sporter was produced with a degree of fit and finish appropriate to a custom gunsmith’s shop. Esquire magazine called it “the piece de resistance of all sporting rifles. It’s a diamond in a field of chipped glass– the rifle for the connoisseur.”[10] Field & Stream named the 52 Sporter one of the “50 Best Guns Ever Made,” calling it “unrivalled in beauty and accuracy.”[11]

Understandably the Sporter represented only a small percentage of Model 52’s produced between 1934 and its discontinuation in 1959: it is today the most collectible of all 52 variants and a good Sporter will generally bring double or more the price of a comparable Target. (This market reality has unfortunately attracted forgers, and fake “Sporters” converted from target models have fooled the unwary).

In the 1990s the Herstal Group, owner of Winchester’s trademarks as well as the Browning Arms Company, marketed “reissue” Model 52s in both Target and Sporting models. These reproductions were made by Miroku in Japan, and sold under both the Winchester and Browning brands.