The following is a timeline of the protests against businessman, television personality, Donald Trump. 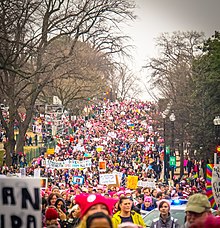 People taking part of the 2017 Women’s March on DC the day after Donald Trump’s inauguration.

Protesters at the inauguration of Donald Trump

Protests against Trump began following the announcement of his candidacy in June 2015, especially after he said that illegal immigrants from Mexico were “bringing drugs, bringing crime, their (not they’re) rapists”.[1][2]

A protest against Trump at the future Trump International Hotel, Washington, D.C. on July 9, 2015

Trump rally at UIC Pavilion in Chicago on March 11, 2016, immediately after news of Trump’s cancellation of attendance of the event. Many protesters cheer “Bernie!” to show their support for Democratic candidate Bernie Sanders.

After Trump won the primaries[edit] 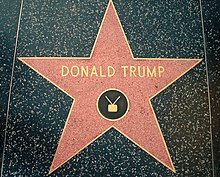 March against Trump in Saint Paul, Minnesota on November 9

Following the announcement of Trump’s election victory, large protests broke out across the United States including other countries such as Canada, United Kingdom, France, Germany, Philippines, Australia, Israel with some continuing for several days, and more protests planned for the following weeks and months.

Thousands of protesters took to the street in Chicago. Chicago Tribune explains that the protest was “relatively peaceful” and was “devoid of any of the heavy vandalism of effigy burning that occurred elsewhere.” Five people were arrested in total.[87][88][89]

High school and college students walked out of classes to protest.[96][112] The protests were mostly peaceful, although at some protests fires were lit, flags were burned, and a Trump piñata was burned.[113][114][115]

Celebrities such as Madonna, Cher, and Lady Gaga took part in New York.[116][117][118] Some protesters took to blocking freeways in Los Angeles, San Diego, and Portland, Oregon, and were dispersed by police in the early hours of the morning.[119][120] One protester was hit by a car.[121] In a number of cities, protesters were dispersed with rubber bullets, pepper spray and bean-bags fired by police.[122][123][124] While protests ended at 3 am in New York City, calls were made to continue the protests over the coming days.[125]

Protesters gathered at Trump Tower in New York on November 10. 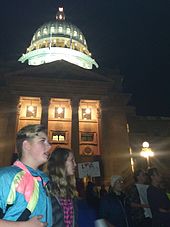 “Love Trumps Hate” was a common slogan, as here at the Idaho State Capitol.

As Trump held the first transition meeting with President Obama at the White House, protesters were outside.[126] Protests continued in cities across the United States. International protests were held in London, Vancouver, and Manila.[127][128] Los Angeles mayor Eric Garcetti expressed understanding of the protests and praised those who peacefully wanted to make their voices heard.[129]

In Austin, Texas, a young girl rallied protesters behind the mantra: “I am a female, I am mixed race, I am a child and I cannot vote. But that will not stop me from getting heard” after which chants of “Love is love, and love trumps hate” followed.[130][131][132][133] In Los Angeles, protesters continued blocking freeways.[134] A peaceful protest turned violent when a small group began rioting and attacking police in Portland, Oregon.[135] The protests in Portland attracted over 4,000 people and remained largely peaceful, but took to the highway and blocked traffic.[136] Acts of vandalism including a number of smashed windows, vandalized vehicles, and a dumpster fire caused police to declare a riot.[136][137] Protesters tried to retain the peaceful nature of the protest and chanted “peaceful protest”.[138]

Protests were held in the following cities:

Numerous petitions were started to prevent Trump from taking office; including a Change.org petition started by Elijah Berg of North Carolina requesting that faithless electors in states that Trump won vote for Clinton instead, which surpassed three million signatures.[149]

Protests occurred in the following cities:

A protest also occurred at the U.S. embassy in Tel Aviv, Israel.[183][184] The American and Mexican national soccer teams also posed together in a Unity Wall in response to Trump’s election before their World Cup qualifying match in Columbus, Ohio.[185]

During a peaceful march in Oregon in the early hours of November 12, one protester was shot by an unknown assailant.[186] Police in Portland, Oregon, said that they arrested over twenty people after protesters refused to disperse.[187]

Protesters at an anti-Trump rally in Indianapolis on November 12

On the first weekend day after the election, a march of over 10,000 people in Los Angeles went from MacArthur Park and shut down the busy Wilshire Blvd corridor.[188][189] In New York City, another crowd cited by NBC News as 25,000[190] marched from Union Square to Trump Tower.[191][192][193] In Chicago, thousands of people marched through The Loop.[194] In Indianapolis, about 500 people gathered at the Statehouse, then proceeded to march downtown.[195] Protesters split off into several groups, some of which moved to the streets and blocked traffic.[196] Some protesters were allegedly throwing rocks at police officers, who responded by firing non-lethal weapons.[197]

Protests continued in the following cities:

In Atlanta, the words “FUCK TRUMP” were projected onto the side of a high-rise hotel by the Metro Atlanta Democratic Socialists of America.[207]
International protests occurred in cities including Toronto, Ontario, Canada, where about a thousand people gathered in Nathan Phillips Square.[208][209] 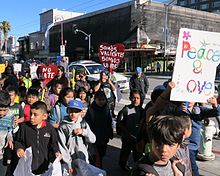 Protesters in Chicago on November 19, Marching toward Trump Tower Chicago 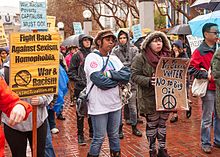 Protesters at an anti-Trump rally in San Francisco

Protest in Minneapolis, Minnesota on November 23

Protest in Chicago on January 20

‘Not My President’s Day Protest’ video from Voice of America 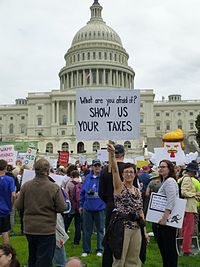 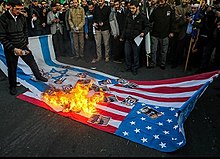 Protest against Trump’s recognition of Jerusalem as capital of Israel, Tehran, 11 December 2017

After Trump won the primaries[edit]

An effigy seen in San Diego on show of May 26, 2016, featuring Trump with the word “Bigot” taped on while wearing a sombrero and holding a Mexican flag