Someday I will find one of these for sale at a good price. Which should tell you on how good a Single Action this gun is. It just shows you on how smart Bill Ruger was. In that only he could take the Colt SAA pistol. Then improve it with a better spring system & much better sights. During the height of the Cowboy craze of the 50’s & 60″s.

Of course I would want one in 357 Magnum. So hopefully one day soon I shall find one!

Here is some more information on them! 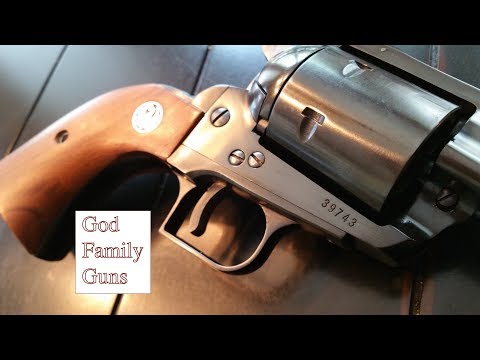 Top 10 Things You Didn’t Know About The Ruger Blackhawk

The Ruger Blackhawk is a 6-shot, single-action revolvermanufactured by Ruger. It is produced in a variety of finishes, calibers, and barrel lengths.

In the early 1950s, Westerns were popular in movies and television. Colt had discontinued the iconic Single Action Army prior to World War II, and few single-action revolvers were available to meet market demand for cowboy-style revolvers. In 1953, the new firm of Sturm, Ruger & Company introduced the Single-Six, a .22 LR rimfire single-action revolver. The Single-Six proved to be a popular seller, leading Ruger to develop and market a centerfire revolver similar to the Single Action Army: the Ruger Blackhawk.[1][2]

The 1955–1962 Blackhawks are known today as the “Flattop” models, because their adjustable rear sights were not protected by “ears” extending up from the frame as later became standard. From 1962 through 1972, Ruger made the “Three Screw” Blackhawk in various calibers, so called by the number of screws visible on the side of the revolver.

The early models of the Blackhawk still operated the same way as the Colt, in that the hammer was half-cocked to load and unload and that the firearm was not safe to carry with all six chambers loaded due to the hammer resting upon the sixth chamber.[5] In 1973, in order to eliminate accidents occurring from the hammer jarring against a round loaded in the sixth chamber, Ruger introduced the New Model Blackhawk. The New Model Blackhawk did not require the hammer to be half-cocked for loading and unloading, and it employed a transfer bar mechanism which prevented the cartridge under the hammer from being fired without the trigger being pulled. The New Blackhawk was seen as limiting firearms accidents and legal liability. Ruger then began offering a retrofit program, offering free transfer bar conversions to earlier variants of the Blackhawk. 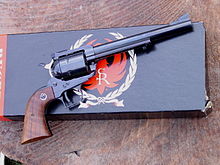 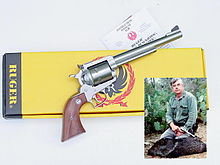 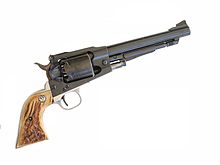 The Ruger Old Army is a 45-caliber percussion revolver based on the Ruger Blackhawk action. 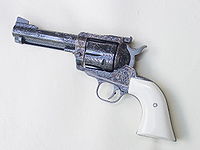 The Blackhawk is a popular base gun for custom work. This one is a cooperative effort by members of the American Pistolsmith’s Guild

Over the years the Blackhawk has appeared in a wide variety of models. These models include: