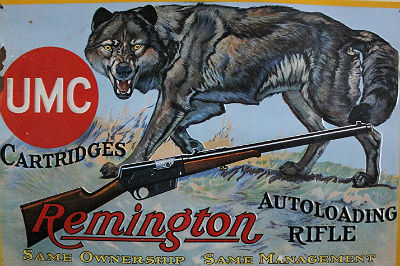 However, the intervening decades have not been kind to the cartridge, and the .35 Remington has fallen out of favor with most mainstream hunters. Though it is still a quite powerful cartridge under the right circumstances, the .35 Remington is now one of the most underrated “woods cartridges” in the United States.

Since it had no competitor at the time — and since it filled an important “medium bore” niche — the .35 Remington quickly caught on with hunters in the United States. The original load of the cartridge propelled a 200-grain, .35-caliber bullet at just under 2,100 feet per second, which generated more than 1,900 foot pounds of energy.

Remington marketed the .35 Remington as a superior alternative to the venerable .30-30 Winchester, which was (and still is) one of the most popular deer-hunting cartridges of the day. Though producing only slightly more muzzle energy in a typical load (1,905 vs. 1,873 foot pounds of energy), the .35 Remington sported a bullet that was 18 percent heavier (200 vs. 170 grains), and with over 35 percent more frontal surface area (.1007 vs .0745 square inches). These seemingly small differences added up to a significant difference in power and effectiveness on game between the two cartridges. 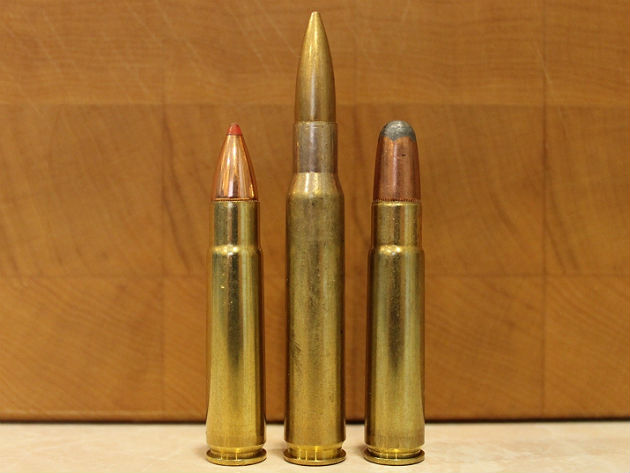 A 200-grain Hornady LEVERevolution (left) and a 200-grain Remington Core-Lokt (right) compared to a .30-06 cartridge.

Remington, Winchester, Federal, Hornady and Buffalo Bore, among others, currently offer a handful of different loads for the .35 Remington. The most common load is a 200-grain soft-point traveling between 2,000 and 2,100 feet per second. However, other bullet weights are available, though less common. For instance, Remington also sells 150-grain load that produces velocities around 2,300 feet per second.

For those who are interested in wringing out all of the power available in the .35 Remington, there are a couple of other options besides the standard 200-grain soft-point loads listed above.

Hornady produces the “LEVERevolution,” which has a pointed, flexible, polymer tip which improves the ballistic coefficient of the normally flat tipped bullet. LEVERevolution bullets, unlike most bullets with pointed tips, are also safe to use in rifles that have tubular magazines (like the Marlin 336). The 200-grain bullet has an advertised muzzle velocity of 2,225 feet per second and a muzzle energy of 2,198 foot pounds.

Buffalo Bore produces 220-grain loads they claim reach a velocity of 2,200 feet per second (2,364 foot pounds), which is a stout load for the .35 Remington. Both of these offer slight improvements over typical factory loads. However, they are high-pressure loads and should only be used in modern firearms, such as the Marlin 336, that are in good condition.

Especially when used in a high-quality rifle, the .35 Remington is capable of excellent accuracy, and I’ve shot many sub-1-inch groups with my Remington Model 81. However, the biggest shortcoming in the cartridge is its limited effective range.

Even when using loads on the upper end of the performance envelope for the cartridge, the .35 Remington still has a relatively slow velocity and low ballistic coefficient. As a result, the cartridge does not have a flat trajectory. Realistically, the maximum effective range for the .35 Remington for most shooters is 200 yards. Depending on the load, 150 yards may be a better estimate.

Hunting with the .35 Remington

Even when using the standard factory loads, the .35 Remington is an outstanding round for use on medium-sized game such as deer, feral hogs and black bear at short ranges. At ranges less than 100 yards, the .35 Remington excels and is absolutely deadly on big game. The heavy, slow-moving bullets deliver bone crushing power and do not produce large amounts of ruined, bloodshot meat that high-velocity cartridges do.

Additionally, the .35 Remington will perform adequately on larger game such as elk and moose (though it’s on the light side for moose). This is even truer when using some of the hotter loads available on the market.

The .35 Remington really comes into its own when used in thick cover — especially when used in handy, quick-pointing rifles such as the Marlin 336 For this reason, the .35 Remington is most popular in the Northeast and Southeast regions of the United States where shooting ranges are short.

When hunters there really need to make a rapid shot and anchor their game quickly, they can rely on a Marlin 336 chambered in .35 Remington. Because of its power and versatility, many generations of hunters from states as varied as Maine, North Carolina and Georgia have successfully hunted deer, moose, bear and hogs with the .35 Remington.

Even though it does not sport the sexy pointed bullets and high velocities of some of the more popular cartridges on the market today, the .35 Remington still maintains a healthy following among American hunters. It is true that the cartridge has its limitations, but used under the right circumstances, the .35 Remington is an outstanding choice.

If we’re being honest with ourselves, the majority of American hunters, especially in the South and Northeast, will take only a handful of shots at big game at ranges past 100 yards in their lifetime. For those close-range shots, the trusty old .35 Remington has few equals.

The .35 Remington: America’s “Other Levergun,” by Glen E. Fryxell, The Great Model 8 & 81 by Richard Jones, and Bullet Frontal Area List, by Chuck Hawks were used as references for this article.