From the outset, the .30-40 cartridge proved popular for hunting, and was chambered in a variety of firearms. In 1899, a Krag in .30-40 caliber was used to shoot the world-record Rocky Mountain elk. The record stood until the latter half of the 20th century.

In October 1899, after reviewing the experiences of the Spanish–American War, U.S. Army ordnance authorities developed a new loading for the .30 Army used in the Krag rifle, in an attempt to match the ballistics of the 7×57mm Mauser cartridge employed by Spanish forces in that conflict. The new loading increased the muzzle velocity in the rifle version of the Krag to 2,200 ft/s (670 m/s) at 45,000 psi. However, once the new loading was issued, reports of cracked locking lugs on service Krags began to surface. In March 1900 the remaining stocks of this ammunition (some 3.5 million rounds) were returned to the arsenals, broken down, and reloaded back to the original 2,000 ft/s (610 m/s) specification.

In 1903, after recommendations from the infantry Small Arms Board, the U.S. Army formally adopted a higher-velocity .30-caliber replacement for the .30-40 or .30 Army cartridge. The new cartridge was designated by its year of adoption, the .30-03.

Rifles, handguns, and other weapons chambered in .30-40 Krag[edit] 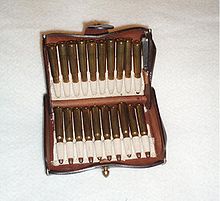 A replica of the McKeever-pattern .30 US Army cartridge case.