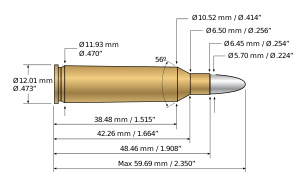 The .22-250 Remington is a very high-velocity (capable of reaching over 4000 feet per second), short action, .22 caliber rifle cartridge primarily used for varmint huntingand small game hunting, though it finds occasional use on deer.[2] This cartridge is also sometimes known as the .22 Varminter or the .22 Wotkyns Original Swift.[3] Along with the .220 Swift, the .22-250 was one of the high-velocity .22 caliber cartridges that developed a reputation for remote wounding effects known as hydrostatic shock in the late 1930s and early 1940s.[4][5]

The .22-250 started life as a wildcat cartridge developed from the .250 Savage case necked down to take a .224 caliber bullet. In the early days of the cartridge there were several different versions that varied only slightly from one to the next, including one developed in 1937 by Grosvenor Wotkyns, J.E. Gebby and J.B. Smith who named their version the 22 Varminter.[3]

The .22-250 is similar to, but was outperformed by the larger .220 Swift cartridge. However, it is in much wider use and has a larger variety of commercially available factory ammunition than the Swift. This makes it generally cheaper to shoot. The smaller powder load also contributes to more economical shooting for users who load their own ammunition. Despite common myths regarding longer barrel life on a 22-250 vs the Swift or other calibers, that is directly related to shooter habits, allowing the barrel to cool between volleys and the speed of the bullet, an important factor for high-volume shooters. Both the Swift and the 22-250 shoot at very similar velocities and bullet weights so barrel wear when used and cooled equally is identical between the two calibers. Due to its rimless case the 22-250 also feeds from a box magazine with ease.

In 1937 Phil Sharpe, one of the first gunsmiths to build a rifle for the .22-250 and long time .220 Swift rifle builder, stated, “The Swift performed best when it was loaded to approximately full velocity,” whereas, “The Varminter case permits the most flexible loading ever recorded with a single cartridge. It will handle all velocities from 1,500ft/sup to 4,500ft/s.”[6]

Sharpe credited the steep 28-degree shoulder for this performance. He insisted that it kept the powder burning in the case rather than in the throat of the rifle, as well as prevented case stretching and neck thickening. “Shoulder angle ranks along with primer, powders, bullets, neck length, body taper, loading density and all those other features,” he wrote. “The .22 Varminter seems to have a perfectly balanced combination of all desirable features and is not just an old cartridge pepped up with new powders.”[6]

Accuracy was consistently excellent, with little need for either case trimming or neck reaming, and Sharpe pronounced it “my choice for the outstanding cartridge development of the past decade.” He finished by saying he looked forward to the day when it would become a commercial cartridge.[6]

In 1963 the Browning Arms Company started to chamber its Browning High Power Rifle in the .22-250, at the time a wildcat cartridge. This was a risky yet historical move on Browning’s part as there was no commercial production of the .22-250 at the time. John T. Amber, reporting on the development of the Browning rifle in the 1964 Gun Digest, called the event “unprecedented”. “As far as I know,” he wrote, “this is the first time a first-line arms-maker has offered a rifle chambered for a cartridge that it—or some other production ammunition maker—cannot supply.” Amber foresaw difficulties for the company but “applauded Browning’s courage in taking this step”. He said he had his order in for one of the first heavy-barrel models, expected in June 1963, and added, “I can hardly wait!”[6]

Two years later in 1965 Remington Arms adopted the .22-250, added “Remington” to the name and chambered their Model 700 and 40 XB match rifles for the cartridge along with a line of commercial ammunition, thus establishing its commercial specification.[7]

The .22-250 was the first non-Weatherby caliber offered in the unique Weatherby Mark V rifle.

The .22-250 is currently the fastest production cartridge, surpassing the .204 Ruger. This round is loaded by Hornady under their Superformance line and is a 35 grain, non-toxic, fragmenting varmint bullet at 4450 feet per second (1356 m/s) from a 24″ barrel.

It is particularly popular in the western states of the USA where high winds often hinder the effectiveness of other varmint rounds in prairie dog hunting. Many states in the USA have minimum caliber restrictions on larger game such as deer, although most states do allow the cartridge to be used for big game.