How Trump Impeachment ‘Knocked Gun Control in the Head’ 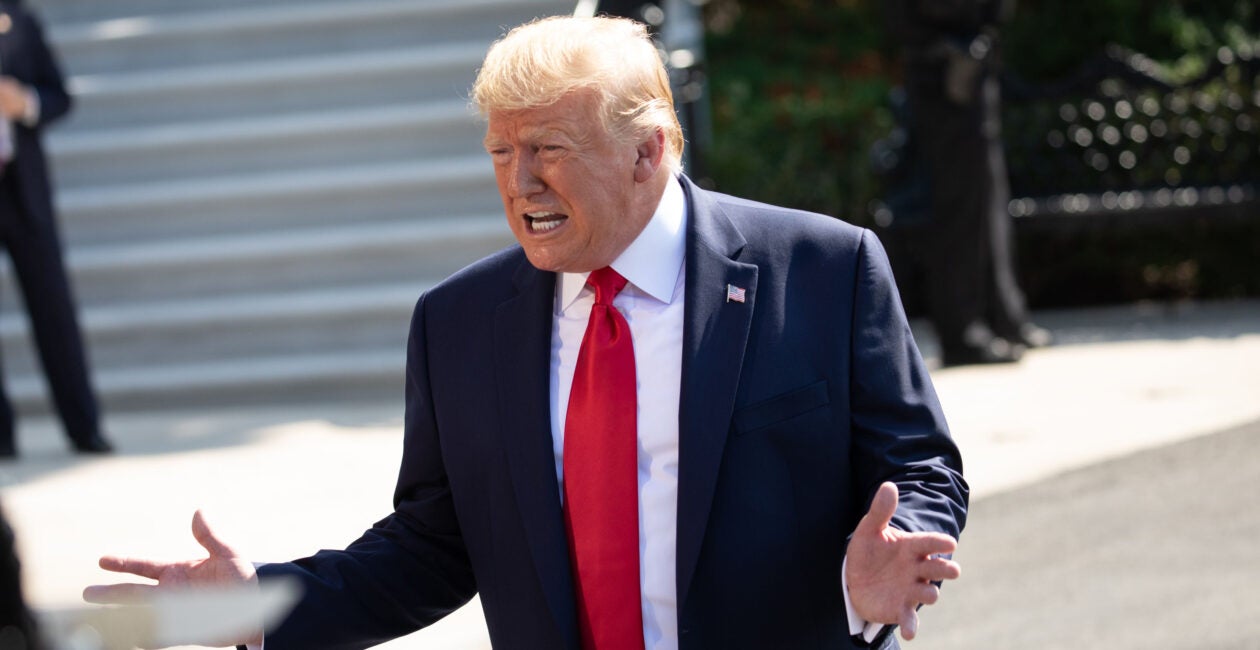 President Donald Trump speaks to reporters before departing on Marine One from the South Lawn of the White House on Aug. 9, 2019. The president talked about his support for a “red flag law,” a gun control measure that might have passed with bipartisan support before Democrats’ impeachment drive. (Photo: Cheriss May/NurPhoto/Getty Images)

In an interview for my book “Abuse of Power: Inside the Three-Year Campaign to Impeach Donald Trump,” Massie noted that the president was ready to pull the trigger on a federal law allowing orders to disallow possession of a gun because of extreme risk, commonly known as a “red flag law.”

“I’ve told my colleagues, the one good thing to come out of impeachment is that it knocked gun control in the head,” Massie said.

The impeachment was nearly certain to fail in the Senate. But, Massie said, House Speaker Nancy Pelosi, D-Calif., was up against progressives’ strong demand for impeaching Trump, and she faced the “choice of getting a major policy achievement for her side or jeopardizing her speakership.”

How are socialists deluding a whole generation? Learn more now >>

“Red flag laws” allow nonstate actors—such as family members, teachers, or employers—to request that a hearing be held on whether someone close to them should have the right to possess firearms temporarily revoked because he or she is an extreme risk of danger to self or others.

Currently, 17 states and the District of Columbia have some such law, but no federal law of this type exists.

What follows is an adapted excerpt from my book “Abuse of Power.”

In early August 2019, two mass shootings in Dayton, Ohio, and El Paso, Texas, occurred within 13 hours of one another during one weekend, murdering 31 people and wounding dozens.

President Trump expressed actual enthusiasm for red flag laws, which are extreme-risk protection orders that allow authorities to confiscate guns in specific cases, such as when a known deranged person owns a firearm.

The National Rifle Association wasn’t thrilled, issuing a statement saying “there needs to be real evidence of danger—and we cannot sacrifice anyone’s constitutional rights without due process.”

The Second Amendment rights group added: “It is not enough anymore to simply say that ‘we need more background checks.’ Considering both suspects in El Paso and Dayton passed them, that is rhetoric for billionaire activists and campaign rallies—not a call for constructive progress.”

The NRA has a good track record of winning arguments, but Trump said he thought the organization either would come along with him on red flag laws or stay neutral.

“I think my base relies very much on common sense, and they rely on me in terms of telling them what’s happening,” Trump told reporters outside the White House before boarding Marine One on Aug. 9, 2019. “I think meaningful background checks are really positive. Politically, I don’t know. Good, bad, or indifferent, I don’t want crazy people having guns.”

Referring to NRA Chief Executive Wayne LaPierre, Trump sounded a tad presumptuous, asserting, “In the end, Wayne and the NRA will either be there or may be a little bit more neutral. That would be OK, too.”

Clearly, a Democrat House would pass a measure that allowed for gun confiscation. But Trump added that Senate Majority Leader Mitch McConnell, R-Ky., was “totally on board.”

Talking to the press, Trump seemed to think this was a unique opportunity where a Republican president would sign a gun control measure.

Trump might have been correct that the NRA and Republican leadership eventually would be on board. Perhaps the NRA was willing to have a throwdown with the president, but it risked alienating many of its members to do so, and worse, could risk damaging Trump and making an anti-Second Amendment Democrat president more likely.

Trump could have pressed the “common sense” angle that it was only taking guns from “crazy people.”

Some activist and Republican members of Congress would have opposed the measure. But McConnell and House Minority Leader Kevin McCarthy, R-Calif., likely would not challenge the president on something he was committed to, and would whip enough of their caucus to vote with almost all Democrats to pass the measure.

A substantial number of progressives in Congress likely would have become born-again Second Amendment advocates, fearful that Trump was trampling on civil liberties and eager to oppose him on anything.

Trump and Pelosi would have declared victory in a bipartisan win. But for the left, it would have been a crowning achievement.

The capacity—at the federal level—to confiscate guns from anyone might have allowed Democrats to get their foot in the door.

All this, of course, would have to be adjudicated in court, but that’s never a certainty—particularly if Chief Justice John Roberts is reluctant to strike down congressionally enacted laws. In this case, such reluctance would be more pronounced in striking down a bipartisan law.

So a red flag law was locked and loaded once the August recess was over and lawmakers returned in September 2019.

“The biggest policy impact is gun control. Trump was going to do a red flag law,” Rep. Thomas Massie, R-Ky., noted in an interview for this book.

It’s something Massie said he and many of his other conservative colleagues would have fought.

But the Kentucky Republican doubts they would have been successful.

“Trump was under tremendous pressure to do gun control and work out a deal with Democrats,” Massie said. “The speaker had the choice of getting a major policy achievement for her side or jeopardizing her speakership. She chose her speakership.”

“I’ve told my colleagues [that] the one good thing to come out of impeachment is that it knocked gun control in the head.”