A discussion developed over dinner recently, where several experienced hunters worked over the subject of the ideal North American rifle for larger game. Many things were taken into consideration including manageable recoil, availability of quality bullets, accuracy out to reasonable range (300 yards maximum), magazine capacity, reliability, and so on.

Dinner and dessert did not manage to outlast the discussion, which ran on for another two hours. This was a world-class problem that needed to be solved right then.

Without turning the answer into a lengthy story, the four of us equally lamented the absence of a good 35 Whelen rifle as a consistent offering by either Winchester in their elegant and unbelievably excellent current-production Model 70 Sporter, or by Remington in their sweet Model 700 CDL.

Of the two, the Winchester would likely be a little heftier but soak up recoil that much better, while the Remington would be somewhat more nimble and easier to carry. An alternative choice would be the Browning X-Bolt in one flavor or another, with its outstanding synthetic, detachable, rotary magazine.

The manufacturers need to understand that the buying public couldn’t care less about their desire to minimize the number of products they keep in production and inventory. They need to get over it. All we’re talking about here that’s different is a 35-caliber barrel.

The 35 Whelen cartridge is nothing more that the 30-06 necked up from 0.308” to 0.358”. That little 50 thousands of an inch difference provides the ability to expel 225-grain bullets at a muzzle velocity of 2600 fps, and 250-grain bullets at 2400. Reloader 15 is the preferred powder, with IMR-4064 as a very close alternative. ALWAYS CONSULT LOADING MANUALS WHEN RELOADING CARTRIDGES !

All of us own or have owned rifles chambered for the 35 Whelen. The cartridge is accurate and, with 225-grain bullets, shoots flat enough to have taken a fine Wyoming pronghorn at 447 (rangefinder measured) yards. Mostly, though, it is thought of as an ideal elk and moose round.

For them we recommend 250-grain bullets if the distance is likely to be no more than 250 yards. For the longest shots, perhaps the 225-grain Nosler AccuBond is the best. It has a b.c. of 0.430, which will give it sustained velocity and energy, and was the bullet used on the aforementioned pronghorn.

Incidentally, the Nosler Reloading Guide on my desk shows a maximum load of IMR-4064 capable of pushing their 225-grain bullets at just over 2800 fps, but that’s with a 26-inch barrel. So let’s talk about barrels…

Our group prefers a barrel length of 22 to 24 inches, and a twist of one-in-12 or one-in 14. I personally prefer a one-in-12 twist, but that’s not necessary for stabilizing most any currently available bullet.

If Barnes came out with a 250-grain TSX, the 12 twist might be needed to stabilize the longer monolithic bullet. I also personally prefer a 24-inch barrel, but for no particular reason.

Most commercial 35 Whelen rifles have had a magazine capacity of four rounds, plus one in the chamber. With a muzzle energy of almost 3400 ft. lbs. (225-grain bullet at 2600 fps), five rounds through a slick-actioned rifle quickly adds up to 17,000 ft. lbs. That’s eight-and-a-half tons, and with well-placed shots should be able to dispatch just about anything. It’s very similar to the 9.3x62mm in power, and in some areas of Africa that cartridge is legal for Cape buffalo. 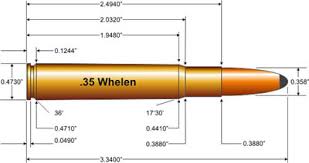