Project Appleseed is a rifle marksmanship clinic that focuses on teaching traditional rifle marksmanship from standing, sitting/kneeling, and prone positions over a two-day weekend shooting clinic for what is termed an “Appleseed”.

It is one of the major activities of The Revolutionary War Veterans Association (RWVA), a 501(c)(3) non-profit organization that teaches and promotes traditional rifle marksmanship, while also teaching American heritage and history with the intent of encouraging people to become active civically.[1][2][3] Project Appleseed is apolitical, a legal requirement of 501(c)(3) organizations.[4][5]

A commentator has questioned the political aspect of the “self-empowerment” of shooting.[6]

The Revolutionary War Veterans Association and Project Appleseed are a Civilian Marksmanship Program affiliated organization, enabling Appleseed participants to buy rifles and ammunition through the CMP.

Project Appleseed started from a series of ads appearing in Shotgun News, a monthly gun trade newspaper publication. These ads were written under a pseudonym by a fellow who simply called himself “Fred”. “Fred,” the founder of Project Appleseed, whose real name is Jack Dailey, wrote a long running column—actually a portion of ad space for Fred’s M14 Stocks—starting in 1999.[7]

A common theme in these columns was “Are you a cook or a rifleman?”, a “cook” being Fred’s term for an unqualified shooter. The name of the project was in deference to Johnny Appleseed, an American pioneer nurseryman and grass roots missionary who traveled the American frontier planting apple trees across the land with the goal of spreading the number of apple trees in America. Fred’s goal was to accomplish the same with civic-minded Riflemen in America.

Project Appleseed itself began in April 2006 in Ramseur, North Carolina.[3] These long-running ads ceased in 2017, upon Jack Dailey retiring and selling his business. The “Shotgun News” publication itself was rebranded as Firearms News in December 2015. A board of directors, termed the “Appleseed Operating Committee”, or “AOC”, took over running Project Appleseed commencing in 2015. The chairman of the board is Tom Kehoe of Palm Bay, FL.

In 2006, Appleseed instructors began a national tour to attract instructors who could maintain and develop local programs.[8] As of 2018, over 120,000 individuals have attended an Appleseed marksmanship and history clinic in all 50 states. An independent, companion program called Mapleseed has been developed in Canada. As of 2018, approximately 700 volunteer instructors teach at Appleseed clinics. They are part storyteller and part marksmanship instructor, telling history stories of the historical events of the opening day of the American Revolutionary War during breaks and over lunch, during two-day Appleseed events.[3]

. Although the program initially focused on the use of the M-1 Garand rifle, shoots today are mostly shot with .22s at 25-meters at scaled silhouette targets for the course of fire.

This is to increase the reach of the program, and allow for cheaper costs of ammo. However, the only requirement for a rifle to use for an Appleseed shoot is that it be 32 caliber (8mm) or less, if a firing a rifle cartridge, or 45 caliber or less, if shooting a pistol caliber cartridge. Also, the rifle needs an accuracy of 4 MOA groups or better[9]. There are still centerfire-only shoots, and known distance shoots where you shoot targets at 100, 200, 300, and 400 yards[10]. 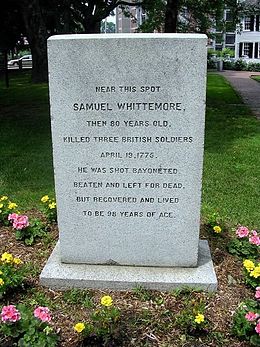 Monument to Samuel Whittemore, the oldest known colonial combatant in the Revolutionary War

The history stories include events leading up to the American Revolution, specifically the Battles of Lexington and Concord, and the subsequent British retreat to Boston. Also told are the Three Strikes of the Match, of the 3 events along Battle Road that had to occur prior to the Revolutionary War flaming into a full-out war.[1][3]

These history stories include an overview of the events of April 18–20, 1775 but focus on stories of individuals such as Paul Revere, Dr. Samuel Prescott, and William Dawes; Captains John Parker (Lexington), Isaac Davis (Acton), and Hezekiah Wyman; Elizabeth Zane; and octogenarian Samuel Whittemore, the oldest known colonial combatant in the American Revolutionary War.[5][3]

Stories of Daniel Morgan and his Morgan’s Riflemen are also told. Known Distance Appleseeds often add stories featuring Patrick Ferguson and Timothy Murphy, who were riflemen that played major roles at the Battle of Brandywine, Second Battle of Saratoga, and the Battle of Kings Mountain.

All Appleseed instructors are volunteers. Prospective instructors go through an arduous process requiring mastery of the course of fire and a minimum of 160 hours hands-on training. Instructors in Training wear orange hats while they work their way up through the ranks. Full instructors are given red hats, and Shoot Bosses are given green hats. 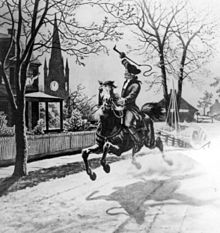