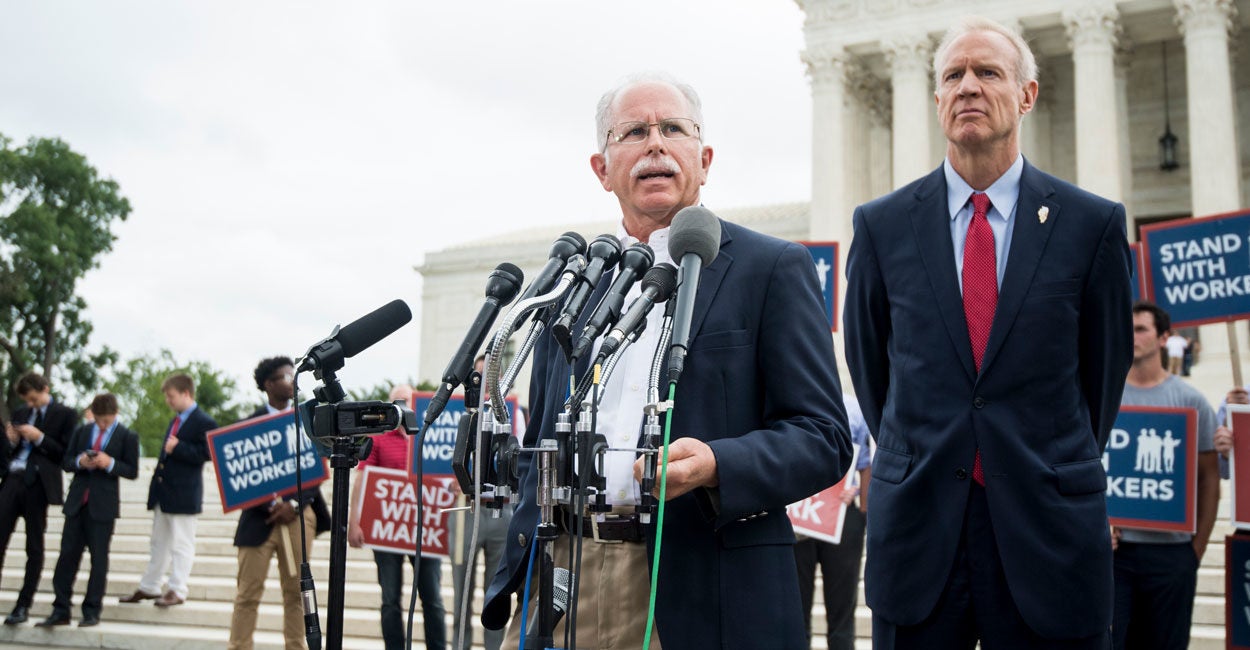 Illinois state employee Mark Janus speaks to reporters as then-Illinois Gov. Bruce Rauner looks on June 27, 2018, outside the Supreme Court after the justices ruled in his favor and against a government workers union in Janus v. AFSCME. (Photo: Bill Clark/CQ Roll Call/Getty Images)

After successfully leading a nationwide charge against government-sanctioned union mandates, Mark Janus could end up back before the Supreme Court.

In a continuation of his legal case, the former child support specialist for the Illinois government asked the 7th U.S. Circuit Court of Appeals to rule that union officials must refund thousands of dollars in union fees taken from his paycheck.

But a three-judge panel of the appeals court ruled in November that Council 31 of the American Federation of State, County, and Municipal Employees could keep the fees it collected from Janus.

Janus asked for a refund of fees the union collected prior to the Supreme Court’s landmark June 2018 decision in his favor, the 7th Circuit panel explained, saying it was not clear whether that decision was meant to be retroactive.

In these trying times, we must turn to the greatest document in the history of the world to promise freedom and opportunity to its citizens for guidance. Find out more now >>

In Janus v. AFSCME, the Supreme Court decided that under the First Amendment government workers cannot be forced either to join a union or pay union fees as a nonunion member. The decision affects about 5 million government employees in 22 states who no longer are required to financially support the political activism of public employee unions.

Janus has petitioned the full 7th Circuit to rehear his case seeking retroactive refunds of union fees taken from his paycheck without his consent since 2013.

Within the next few weeks, Janus will petition the Supreme Court to address this same question, Brian Kelsey, a lawyer with the Liberty Justice Center, a nonprofit, public interest law firm, told The Daily Signal in an interview.

Janus’ petition to the high court is due in early March.

The Janus case is one of several cases—sometimes described as “clawback cases”—filed by the Illinois-based Liberty Justice Center on behalf of public employees in partnership with the National Right to Work Legal Defense Foundation, a Virginia-based nonprofit that supports right-to-work initiatives outlawing union mandates.

More than 30 “Janus-related cases” could result in over $120 million in refunds, according to a press release from Liberty Justice Center.

“These fees were illegally taken from workers and that’s why we are asking the courts to give them back,” Kelsey said, adding:

The Supreme Court has already ruled in favor of workers … that these fees were unconstitutionally taken and what the unions did was wrong, and that they must give the money back. The unions knew the Janus case was working its way through the court system and they knew they were likely to lose this decision. But instead of putting the money aside, they continued to take it away.

Because the Supreme Court explicitly ruled in the Janus case that employees must affirmatively consent before a union may withhold fees from their paychecks—an “opt in” as opposed to an “opt out”—workers who seek refunds are in a strong position, Kelsey argues.

In his majority opinion, Justice Samuel Alito made it clear that the deduction of union fees from a nonmember’s wages without his or her consent violates the First Amendment.

Among the clawback cases in which Liberty Justice Center has partnered with National Right to Work is a second case in Illinois against the same AFSCME local, which is up in the air pending the outcome of the Janus case.

The biggest case so far comes out of Maryland, where 19 state employees filed suit against AFSCME Council 3. They seek a refund of nonmember union fees collected between Sept. 4, 2016, and June 2018, the span permitted under the state’s statute of limitations.

Liberty Justice Center estimates that the plaintiffs and almost 10,000 other Maryland state employees had about $7 million in union fees taken from their paychecks during this time period.

The Daily Signal sought comment from AFSCME and SEIU, but neither union had responded by publication time.

Gary Mattos, a dietary officer with the Maryland Department of Public Safety and Correctional Services, is the lead plaintiff in the Maryland case. He has been on the job for more than 20 years.

When he was hired in 1999, Mattos worked in an “open shop” environment without any union mandate, he said in an interview with The Daily Signal. But in 2011, a law went into effect requiring nonunion employees to pay a union “fair share” fee.

“I remember I had an AFSCME member come to my door [who] told me for just a few dollars more I could become a union member,” Mattos said. “But I wouldn’t join the union for even a few pennies more because what they did was wrong, and I don’t think it’s right to force people to pay these fees.”

After doing some research, Mattos found that he had paid more than $2,200 in union fees over the years, but under the statute of limitations he could get back only about $800.

“So basically, one way to look at it is I had to pay about $400 a year to keep my Maryland state job,” Mattos said, adding:

Some people think I’m against unions, but I’m not. Unions can be very good, and people should be free to join a union if that’s what they want to do. But I don’t like the way they got my money. The treatment from AFSCME felt like bullying, and I felt it was important to stand up even though I don’t like being in the spotlight.

Liberty Justice Center estimates that Maryland state workers could receive about $7 million in refunded union fees if Mattos succeeds in his suit.

“Unlawfully seizing union fees from workers and then refusing to return them in utter defiance of the Supreme Court’s Janus decision shows how little AFSCME officials care about the rights of the very workers they claim to represent,” Mark Mix, president of the National Right to Work Legal Defense Foundation, said in a press release.

“Union bosses across the country have profited to the tune of billions of dollars by violating public employees’ First Amendment rights. This case joins dozens of others coast-to-coast in seeking the return to workers of money that the Supreme Court has affirmed should never have been taken from them in the first place,” Mix said.

A statute of limitations is operative in all the clawback cases.

Janus himself, for example, seeks a refund dating to March 23, 2013, which is as far back as he can go under Illinois law.