Vincent Robert Capodanno (February 13, 1929 – September 4, 1967) was a Roman Catholic priest and Maryknoll Missioner (M.M.) who was killed in action while serving as a United States Navy chaplain assigned to a Marine Corps infantry unit during the Vietnam War. He was a posthumous recipient of America’s highest military decoration, the Medal of Honor, for heroic actions above and beyond the call of duty. The Catholic Church has declared him a Servant of God, the first of the four stages toward possible sainthood.

Vincent R. Capodanno Jr. was born on Staten Island, New York, on February 13, 1929, the tenth and youngest child of Italian immigrants. He graduated from Curtis High School on February 4, 1947, and attended Fordham University for a year while also working as an insurance clerk. In 1949, he entered the Maryknoll Missionary Seminary in Ossining, New York, which included extensive studies in Illinois and Massachusetts. He was ordained a Roman Catholic priest on June 14, 1958.[1][2]

Father Capodanno’s first assignment as a missionary was in 1959 with aboriginal Taiwanese in the mountains of Taiwan, where he served in a parish and later in a school. After six years, he returned to the United States for leave and then was assigned to a Maryknoll school in Hong Kong. Shortly after, he requested to serve as a military chaplain in Vietnam as the American presence escalated.[1][2]

On December 28, 1965, Father Capodanno received his commission as a lieutenant in the Navy Chaplain Corps. He then requested to serve with the Fleet Marine Force (FMF), in Vietnam. After some training to serve within the Marine Corps, he was assigned in April 1966 to the 1st Battalion, 7th Marines, 1st Marine Division in South Vietnam. In December, he was transferred to the 1st Medical Battalion, 1st Marine Division until his year’s tour was completed. In June 1967 after a one-month leave, he returned to Vietnam for a voluntary six-month extension, and in July was assigned to the 1st Battalion, 5th Marines. In August, he was assigned to H&S Company, 3rd Battalion, 5th Marines, 1st Marine Division. Even before his sacrificial death, he was widely known for his willingness to share the hardships of suffering Marines – “Radiating Christ” to those around him, in the terminology of Father Raoul Plus, a World War One chaplain studied by Maryknollers – or simply the “Grunt Padre”, in the words of Capodanno’s Marine companions.[1][2][3][4]

On September 4, 1967, at 4:30 am, during Operation Swift in the Thang Binh District of the Que Son Valley, elements of the 1st Battalion, 5th Marines encountered a large North Vietnamese Army (NVA) unit of approximately 2,500 men near the village of Dong Son. The outnumbered and disorganized Company D of the 1st Battalion was in need of reinforcements. By 9:14 am, 26 Marines were confirmed dead, and two rifle companies from the 3rd Battalion, 5th Marines were committed to the battle. At 9:25 am, the commander of 1st Battalion requested further reinforcements.[5]

When he heard that two platoons of M Company from his battalion were taking casualties and about to be overrun by the enemy, Father Capodanno went among the wounded and dying Marines of Second Platoon, helping them and giving last rites. He was wounded in the hand, arms, and legs. Refusing medical evacuation, he went to help a seriously wounded Navy corpsman and two wounded Marines only yards from an enemy machine gun and was killed;[1] 14 Marines and 2 corpsmen also were killed from his battalion.[6] His body was recovered and interred in his family’s plot in St. Peter’s Cemetery (Staten Island).[7][8]

On December 27, 1968, Secretary of the Navy Paul Ignatius notified the Capodanno family that Lieutenant Capodanno would posthumously be awarded the Medal of Honor in recognition of his selfless sacrifice. The official ceremony was held January 7, 1969.[9]

On May 19, 2002, Father Capodanno’s Cause for Canonization was officially opened. In May 2004, the initial documentation was submitted to the Congregation for the Causes of Saints, with CatholicMil (later renamed Mission Capodanno) acting as Petitioner and with Capodanno’s biographer Father Daniel Mode named Postulator. On May 21, 2006, Capodanno’s official designation as a Servant of God was announced in Washington D.C., by Archbishop Edwin F. O’Brien of the Archdiocese for the Military Services, USA. On October 1, 2013, Archbishop Timothy P. Broglio presided over the formal renewal of the opening of the Cause for Beatification. Broglio announced at this time that the newly established Capodanno Guild would serve as the Petitioner of the Cause, and Andrea Ambrosi as Roman Postulator.[10][11]

In 2017, for the 50th anniversary of Capodanno’s death, EWTN collaborated with the Guild to produce Called and Chosen, a documentary film publicizing his life and the ongoing canonization effort. The film won the Catholic Press Association‘s 2018 Gabriel Award for Best Religious TV, National Release.[12]

Father Capodanno’s awards and decorations include:[1][6]

Father Capodanno’s official Medal of Honor citation is as follows:

For conspicuous gallantry and intrepidity at the risk of his life above and beyond the call of duty as Chaplain of the 3d Battalion, 5th Marines, 1st Marine Division (Reinforced), FMF, in connection with operations against enemy forces in Quang Tin Province, Republic of Vietnam, on 4 September 1967. In response to reports that the 2d Platoon of M Company was in danger of being overrun by a massed enemy assaulting force, Lieutenant Capodanno left the relative safety of the Company Command Post and ran through an open area raked with fire, directly to the beleaguered platoon. Disregarding the intense enemy small-arms, automatic-weapons, and mortar fire, he moved about the battlefield administering last rites to the dying and giving medical aid to the wounded. When an exploding mortar round inflicted painful multiple wounds to his arms and legs, and severed a portion of his right hand, he steadfastly refused all medical aid. Instead, he directed the corpsmen to help their wounded comrades and, with calm vigor, continued to move about the battlefield as he provided encouragement by voice and example to the valiant Marines. Upon encountering a wounded corpsman in the direct line of fire of an enemy machine gunner positioned approximately fifteen yards away, Lieutenant Capodanno rushed forward in a daring attempt to aid and assist the mortally wounded corpsman. At that instant, only inches from his goal, he was struck down by a burst of machine gun fire. By his heroic conduct on the battlefield, and his inspiring example, Lieutenant Capodanno upheld the finest traditions of the United States Naval Service. He gallantly gave his life in the cause of freedom.[13] 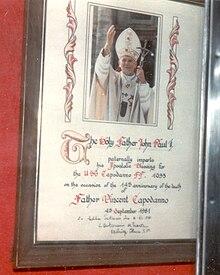 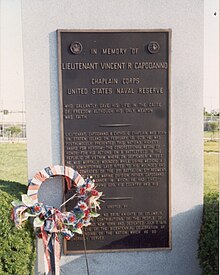 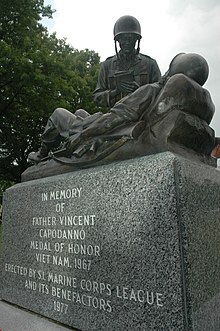 USS Capodanno (FF-1093) was named in honor of Lieutenant Capodanno. The Capodanno was commissioned November 17, 1973, and became the first ship in the US fleet to receive a Papal Blessing when it was blessed by Pope John Paul II on September 4, 1981, the anniversary of the chaplain’s death. On July 30, 1993, the ship was decommissioned and sold to Turkey.[2]

In March 1971, the Knights of Columbus, Madonna Council in Staten Island began a public campaign for a permanent memorial honoring Father Capodanno in his home borough. In October 1974, a bill was proposed to change the name of Seaside Boulevard to Father Capodanno Boulevard; a year later, the bill was passed by the Mayor of New York. For the United States Bicentennial weekend, the city of New York declared July 3, 1976, “Father Capodanno Day”, and a memorial Mass was followed by a parade that included the United States Marine Corps Color Guard, marching bands, Boy and Girl Scouts, and many other groups.[14][15]

Near the midpoint of Staten Island’s Father Capodanno Boulevard, at the corner of Sand Lane, a monument in the chaplain’s honor is made of light gray Barre granite, stands 8′ high and 4′ wide and has a bronze plaque. Near the north end of the boulevard, alongside Fort Wadsworth‘s Father Capodanno Memorial Chapel, stands a 1977 statue of the chaplain praying for a fallen corpsman during their final battle.[16]

Saint Vincent Chapel, in Father Capodanno’s Taiwanese mission territory, was his family’s first choice as a memorial. Within four months after his death, almost $4,000 had been raised by organizations such as The American Legion, The Veterans of Foreign Wars, the Knights of Columbus and the Marine Corps League. After various delays, the chapel was completed in 1993. It was built in the small mountain town of Thiankou with the help of Father Daniel Dolan, another Maryknoller and Father Capodanno’s former pastor in Taiwan.[14][16]

Lieutenant Capodanno made the ultimate sacrifice ministering to the wounded and dying during savage fighting in Vietnam. He has become the third chaplain in our country’s history to receive the Medal of Honor and the second Navy chaplain to be so honored.

Further memorials to Father Capodanno were noted in his published biography:[16]

Additional locations have been: