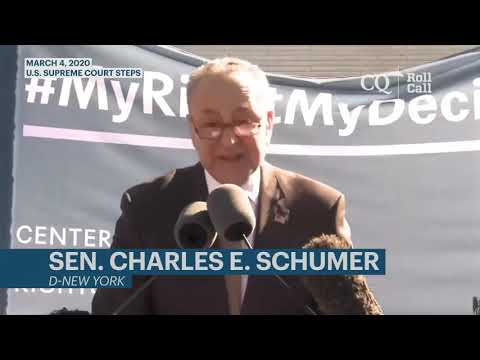 It should be interesting to see if a judge will simply dismiss this as unfounded, ruling that Schumer’s public statement was mere political hyperbole. Even after the Chief Justice of the United States Supreme Court has called Schumer’s statement was “threatening” and “dangerous.”

These remarks by @SenSchumer were inexcusable. Chief Justice Roberts was right to call him on his comments. I hope the Senator, whom I’ve long admired and consider a friend, apologizes and takes back his implicit threat. It’s beneath him and his office. https://www.washingtonpost.com/politics/schumer-vows-kavanaugh-gorsuch-will-pay-the-price-for-vote-on-abortion-rights-case/2020/03/04/ce4ae2b4-5e5a-11ea-9055-5fa12981bbbf_story.html …

Republicans seized on the Senate minority leader’s comments as threats. His spokesman said he was referring to the price that the Republican Party would pay for such a decision.

It might be hard for even a New York judge to conclude that Schumer’s tirade wasn’t an actual threat when the Chief Justice and a top lefty law prof have acknowledged that’s exactly what it was.

Naturally, a confiscation order will have to disarm Senator Schumer’s security detail as well, just because he might get access to those guns.

Of course, since this application is based on actual evidence — Schumer’s own recorded words — rather than unsubstantiated feelings, a red flag order isn’t really needed. His very public threat happens to be a violation of New York Consolidated Law § 240.30(1)(a).

A person is guilty of aggravated harassment in the second degree when:

1. With intent to harass another person, the actor either:

(a) communicates, anonymously or otherwise, by telephone, by computer or any other electronic means, or by mail, or by transmitting or delivering any other form of communication, a threat to cause physical harm to, or unlawful harm to the property of, such person, or a member of such person’s same family or household as defined in subdivision one of section 530.11 of the criminal procedure law, and the actor knows or reasonably should know that such communication will cause such person to reasonably fear harm to such person’s physical safety or property, or to the physical safety or property of a member of such person’s same family or household; or

Threatening is a Class A misdemeanor good for 12 months in jail. Or, since this threat went out to the world — interstate — 18 U.S. Code § 875 could apply. That one is good for five years.

The other well known problem with red flag orders is that not only do they leave the dangerous person on the street to threaten more people, they don’t get the disturbed Senator the help he so clearly needs.

Hopefully, that state will also invoke § 9.39(a)(2) in order to take him into custody for mental health evaluation and treatment.

2. a substantial risk of physical harm to other persons as manifested by homicidal or other violent behavior by which others are placed in reasonable fear of serious physical harm.

Let’s sit back and watch the two-tier legal system at work. Will Schumer’s threat draw the same law enforcement attention you would attract if you tweeted that same statement about a couple of highly placed officials in the judicial branch (i.e., a guaranteed contact from the FBI)?