The University of California-San Diego is now embroiled in a personal injury lawsuit after an election protest gone wrong.

Mariana Flores, a sophomore at UCSD, was demonstrating against Donald Trump’s victory on a busy San Diego freeway when a vehicle hit her. The accident crushed her pelvis, fractured her leg, and caused other serious injuries, reported The Guardian campus newspaper.

Flores, in her suit filed in late November, partly blames campus officials for her injury, arguing they should have stopped the protest before it got dangerous, according to news reports. 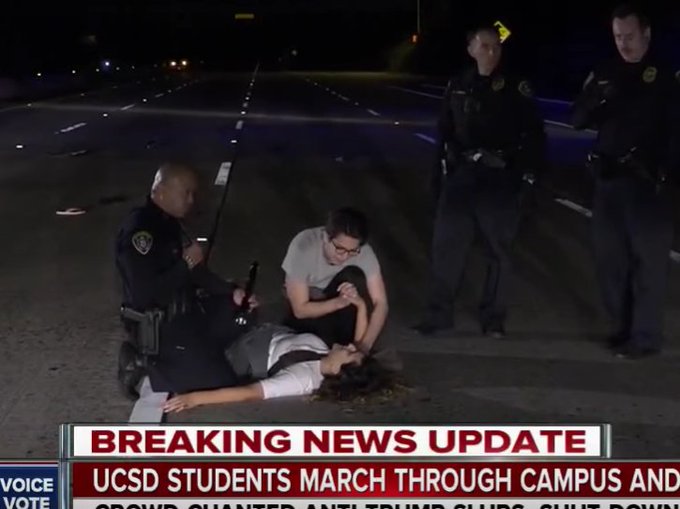 UCSD students blocked traffic to protest Donald Trump and a girl promptly got hit by a car http://trib.al/Kj7sj1j

Flores’ attorney did not respond to requests from The College Fix seeking comment. A UC San Diego spokesperson said that the university could not comment on pending litigation.

The Nov. 2016 protest had began at “Library Walk” and journeyed through campus. Next, demonstrators ended up on the I-5, a very large and busy eight-laned freeway that cuts through San Diego.

The car that stuck Flores had gotten around an emergency vehicle that had been attempting to block traffic so authorities could shut down the freeway, according to the Los Angeles Times.

In an interview with The Guardian, Gene Sullivan, Flores’s lawyer, asserted that the university planned, organized and knew the protest was happening for hours and did nothing to stop it.

“According to Sullivan, not doing anything and failing to act is legally the same thing as supporting the protest,” the newspaper reported. “Sullivan further alleged that the protest was encouraged by people in positions of authority at the university, and that ‘if anyone that is in authority with the university – a [Residential Advisor] – says ‘let’s go,’ the university would be responsible.’”

The complaint also lists the University of California Regents, the city and county of San Diego, the state of California, and the driver of the vehicle as defendants in the lawsuit.

When asked about the lawsuit by the Los Angeles Times, Sullivan said “We think it’s a case of shared responsibility of the school, Maria and the driver, and we’re not saying that anybody is without fault or fault-free. We think other people bear some responsibility as well.”

In addition, Sullivan explained that if any person representing the university, even if that person is simply a Residential Advisor, encouraged students to go to the protest, then the university would bear responsibility.