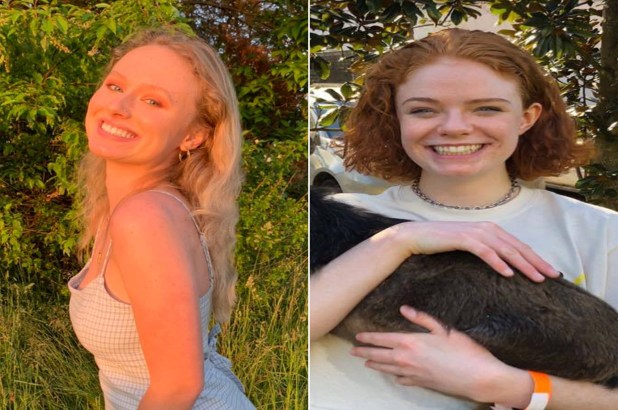 “Chick Guevaras” like Kathryn Patterson (left) and Clara Kraebber ought to suffer the consequences of their dangerous behavior.

The modern crop of American leftist revolutionaries are a curious bunch. These are the children of the high bourgeoisie, often women, “cosplaying” the revolution until they get arrested and suddenly playtime turns into hard time.

For a growing list of Chick Guevaras, real legal consequences are following from what they thought would be a frolicking freedom fight — and how they react reveals much about their privilege.

Take Kathryn Patterson, ­arrested during the troubles in Lancaster, Pa., last week. She is a sorority sister at a fancy private college. Wealthy parents. A very charmed life. That is, until the white guilt kicked in, and it was time to allegedly participate in ­violent riots. Patterson’s case is similar to that of the Upper East Side’s own Clara Kraebber, ­another rich debutante type taking up class struggle.

But a funny thing happens on the way to neo-Marxist utopia. Once these unlikely guerrilla warriors are apprehended, they start demanding all of the protections provided by the very legal system they say is corrupt beyond repair.

Patterson’s father was outraged that his daughter was being held on $1 million bail, and he claims she has been denied access to the family attorney. Whoa, whoa, whoa — family attorney? Shouldn’t these allies of the downtrodden be relying on public defenders like the people they claim to be defending?

In Gotham this summer, we had two very successful attorneys ­allegedly set a cop car alight with a Molotov cocktail. They now face up to life in prison. Column inch after inch in the liberal press bemoans that one mistake may now destroy these promising lives. After all, who hasn’t thrown a flaming bottle of alcohol at a police car without carefully checking to see if anyone was inside?

Let he who is without sin cast the first firebomb.

It’s all fun and games until somebody goes to jail. Going to jail, of course, is what civil rights leaders in the past did.

But there is a big difference ­between the late John Lewis and the Chick Guevaras of today. Men like Lewis and the Rev. Martin Luther King Jr. went to jail peacefully protesting, or breaking unjust laws, not setting stuff on fire. They welcomed the consequences of their actions to expose the inequality of the system.

They were serious people, not disaffected minor characters in some Bret Easton Ellis novel.

The more we see the lily-white (albeit often tattooed) faces of ­Antifa rioters, the more sophomores from Seven Sisters schools get arrested, the clearer it becomes: These violent displays aren’t some organic uprising by the dispossessed, but rather the actions of unhappy children of privilege long taught to hate America. And it really doesn’t help when ­Kamala Harris and members of Joe Biden’s campaign urge Americans to help bail these criminals out of jail.

These frauds were given more than they could ask for in life. Yet we’re supposed to feel sorry for them while ignoring the deaths of poor kids in our cities — brought about by the anti-police policies championed by these snot-nosed brats.

Sorry, no. I refuse to feel bad. If these princesses really think America is so bad that they have to set things on fire, so be it. But when they get caught, they should go to the slammer and learn to enjoy it. That’s part of the whole deal. Being a revolutionary isn’t all fun outfits and crazy slogans.

Luckily for the Chick Guevaras, our system is nowhere near as cruel as they claim. Even those who do serious time can look forward to tenure-track jobs teaching courses on “Queer Resistances in Palestine” or whatever. The hopeful lesson for the rest of us trying to live our lives is that these clowns have nothing substantive to offer. Their temper tantrums are a testament to their own hang-ups and f - - kups.