The 7mm Remington Magnum rifle cartridge was introduced as a commercially available round in 1962,[2] along with the new Remington Model 700 bolt-action rifle. It is a member of the belted magnum family that is directly derived from the venerable .375 H&H Magnum.[3] The original purpose of the belted magnum concept taken from the .300 H&H Magnum and .375 H&H Magnum, was to provide precise headspacecontrol, since the sloping shoulders, while easing cartridge extraction, were unsuitable for this purpose. Improved cartridge extraction reliability is desirable while hunting dangerous game, which would be of concern when needing a fast follow up shot. The 7mm Remington Magnum is based on the commercial Winchester .264 Winchester Magnum, .338 Winchester Magnum, and .458 Winchester Magnum, which were based on the same belted .300 H&H Magnum and .375 H&H Magnum cases, trimmed to nearly the same length as the .270 Weatherby Magnum.[3]

On its introduction, the 7mm Remington Magnum substantially usurped the market share held by the .264 Winchester Magnum, which went into sharp decline in popularity and sales after 1962.[4] Remington has offered Managed Recoil ammunition for achieving reduced recoil when shooting and for generating less meat damage when hunting smaller game.

The 7mm Remington Magnum offers ballistics better than the .30-06 Springfield with bullet weights of 175 grains and less, one of the more popular loads being a 160 grain spitzer loaded to 3,000 ft/s (910 m/s). This is due both to the higher muzzle velocity of the magnum compared to the Springfield and that .284 diameter bullets tend to have better ballistic coefficients than .308 diameter bullets of comparable mass. Because of the smaller bullet diameter .284 diameter also have higher sectional density than .308 diameter bullets, and because of that better penetration in the target (it takes a 206 grain .308 diameter bullet to get the same sectional density as a 175 grain .284 bullet, an increased weight that requires 15-20% more muzzle energy to get the same muzzle velocity). The heaviest commercially loaded ammo available for the 7mm is 180 grains[citation needed], while the .30-06 Springfield can be loaded with bullets up to 220 grains, but for a .308 caliber to equal the flat trajectory and penetration of a .284 diameter 180 grain bullet with a muzzle velocity of 2,860 ft/sec, as offered for the 7mm Remington Magnum, requires muzzle energy close to what the .300 Winchester Magnum can offer, i.e. well beyond what the .30-06 can deliver. 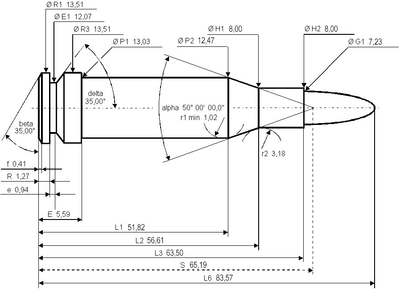 According to the official C.I.P. (Commission Internationale Permanente pour l’Epreuve des Armes à Feu Portatives) rulings, the 7mm Remington Magnum case can handle up to 430.00 MPa (62,366 psi) Pmax piezo pressure. In C.I.P. regulated countries every rifle cartridge combo has to be proofed at 125% of this maximum C.I.P. pressure to certify for sale to consumers. This means that as of 2016, 7mm Remington Magnum chambered arms in C.I.P. regulated countries are proof tested at 537.50 MPa (77,958 psi) PE piezo pressure.[6]

Because of its flat shooting nature and the relatively tolerable recoil, the 7mm Remington Magnum is especially popular for Western plains use in the United States, as well as for use on plains game in Africa. It has also been chambered in sniper rifles as the US Secret Service counter-sniper team has deployed this cartridge in urban areas along with the .300 Winchester Magnum.[8] Popular online gun author Chuck Hawks calls the 7mm Remington “one of the great all-around rifle cartridges.”[9]

Choice of bullet and barrel length[edit]

Bullet choice when reloading is critical, as bullet velocity at close ranges may result in less robust bullets disintegrating without providing significant penetration on especially tough game.[10] Thus one would do well to use a premium bullet of some sort, for instance a bonded bullet.[11] The choice of barrel length is also critical, as a 26-or-27-inch (660 or 686 mm) barrel is commonly needed to achieve the full velocity potential of the cartridge, and a 24 inches (610 mm) barrel should be viewed as a practical minimum. This is because in shorter, i.e., sporter, barrels, of approximately 22 inches (559 mm), the cartridge ballistics deteriorate to much the same as those achieved in a .270 Winchester, while generating more recoil and muzzle blast than the .270 Winchester.