Democratic presidential candidate Kamala Harris said that if she were the president she would take quick executive action to prevent future shooting incidents.

Speaking to union members at the AFSCME forum at the University of Nevada, Las Vegas on Saturday, Harris said she would use her power as president to “put in place rules that improve this situation.”

Harris’ comments at the evening forum followed a shooting incident in El Paso, Texas on Saturday morning where at least 20 people were killed at a WalMart.

Harris was asked by a reporter to elaborate on her plan and whether or not it would include creating a database of banned guns or whether door-to-door confiscation would be considered.

Last week it was Gilroy. Today it’s El Paso. How can our country tolerate this? My prayers are yet again with families who are grieving and my thanks are with the first responders, but that is not enough. We must act.

9,901 people are talking about this

“I’m actually prepared to take executive action to put in place rules that improve this situation,” Harris said via the Washington Examiner, specifying that she would not wait for Congress to pass legislation or hand over the issue for Congress to address.

“I also have as part of my background and experience working on this issue, when I was attorney general [of California], and we put resources into allowing law enforcement to actually knock on the doors of people who were on two lists — a list where they had been found by a court to be a danger to themselves and others and another list where they were precluded and prohibited from owning a gun because of a conviction that prohibited that ownership,” she added. 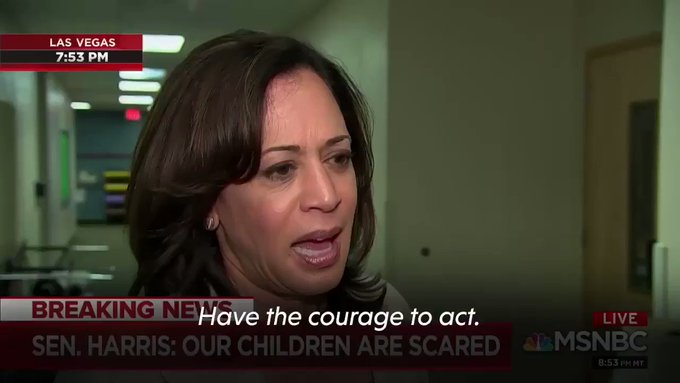 10.1K people are talking about this

Harris commented that she would send law enforcement door-to-door to confiscate guns from illicit people.

“Those lists were combined and then we sent law enforcement out to take those guns, because, listen, we have to deal with this on all levels, but we have to do this with a sense of urgency and we have to act. Enough with the talk,” she said.