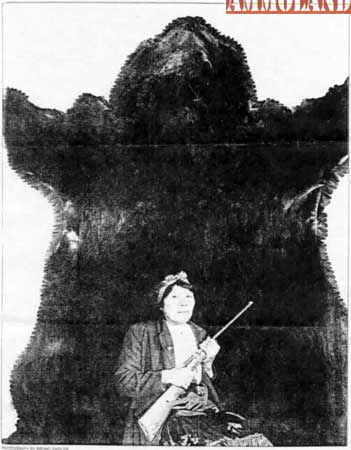 Arizona -(Ammoland.com)- On 10 May, 1953, Bella Twin was hunting small game with her partner, Dave Auger, along an oil exploration cutline south of Slave Lake, in Alberta, Canada. She was 63 years old.

They saw a large grizzly bear coming toward them. Wishing to avoid an encounter, they hid off the side of the cut.

But the bear kept coming closer and closer.  The bear got so close that Bella Twin thought it less risky to shoot the bear than to not shoot it.  It was probably only a few yards away. Some accounts say 30 feet. Perhaps she saw it stop and start to sniff, as if it had caught their scent. We may never know.

She shot at the side of the bears head.  Knowing animal anatomy very well (she was an experienced trapper, and had skinned hundreds, perhaps thousands of animals) she knew exactly where to aim to penetrate the skull at its weakest point.

She shot, the bear dropped. It was huge. She went to the bear and fired the rest of the .22 long cartridges that she had, loading the single shot rifle repeatedly, to “pay the insurance” as Peter Hathaway Capstick said.  She made sure the bear was dead, and not just stunned.  My father taught me the same lesson when I was 13.

Here is a picture of the bear’s skull and the .22 caliber holes in the left side.

For those curious about how to place that shot on a live bear, the place to aim is half way on a line from the center of the eye to the ear hole.

From the front, you would aim directly up the nose. If the bear’s mouth is open, aim for the back of the roof of the mouth.  Aiming above the nose will likely miss the brain.

What rifle did Bella use to shoot the world record grizzly in 1953?

I wrote an article asking for help in 2014. Several alert readers replied over the intervening period.  Because of their efforts, and the Internets, I have been able to find more detail about Bella Twin, her rifle, and the event. One reader was able to track down the current location of the rifle and send me pictures taken by the curator of the museum. The rifle is a Cooey Ace 1 single shot .22 rimfire. 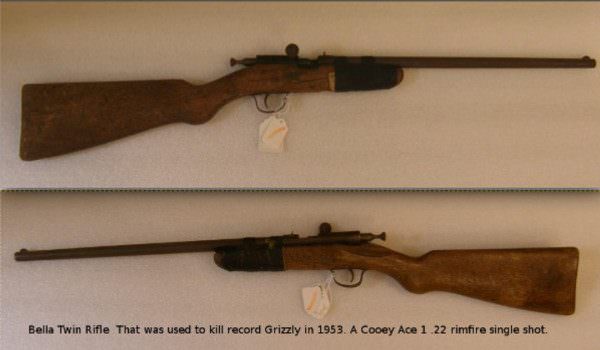 Bella Twin used the rifle for many years on her trapline. The rifle was produced between 1929 and 1934.  From a commenter at Ammoland:

here is a quote from the curator of the museum about the gun when i talked to him via email:

” I can tell you that the rifle is a .22 caliber single shot Cooey Ace 1. I can also tell you that the rifle’s condition, which has remained as it was when Bella Twin shot the bear, leaves a lot to be desired. There is corrosion on the receiver and barrel, the front screw that holds the stock to the barrel is missing and has been replaced with hockey tape. There is a piece of rubber under the barrel – probably as a method of “free floating” the barrel. There is no finish left on the wood. The stock is missing a part by the receiver and there is a wood screw reinforcing a crack in the stock.”

Bella Twin was a Cree woman. She had a reputation for being a deadly shot.  Her grandson, Larry Loyie became an award winning writer.  He wrote a fictionalized account of the bear shooting to include his grandmother in his prize winning children’s book, As Long as the Rivers Flow. From smokyriverexspress.com:

Kokom Bella Twin is a highlight of the adventures in As Long as the Rivers Flow. The tiny 63-year-old Cree wo- man, who lived on Rabbit Hill overlooking Slave Lake, shot the biggest grizzly bear in North America.

“I had to put Bella into the book. She was being forgotten. The only people who remembered her were readers of hunting magazines,” said Larry. 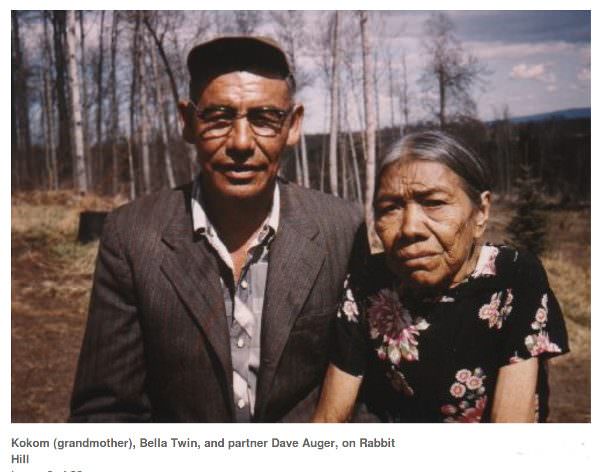 Bella Twin and her partner Dave Auger, family photo by Larry Loyie. The photo was likely taken in the 1960’s or later, because it is in color.

In Bruno Engler: Photography, the famous photographer has pictures of Bella in front of the bear skin. When Bruno told her that he wanted to take the picture, she insisted on going home and sprucing up, and changing into nicer clothes. Engler writes:

She was dressed very simply. When she thought I was going to take a picture of her she said “No, I have to go home first.” And she came back with a dress and put some cornstarch on her face for makeup. I said “Bella Twin, you looked much better before.”

Women want to look their best in a photograph that will be shown to the world. This explains the somewhat awkward grip on the Cooey Ace 1 in the Engler photograph. Her left hand covers up the repair to the rifle.

What ammunition did Bella Twin use? The written accounts say .22 Long.

This style of box was produced by CIL in Canada from 1950 to 1956. It is probably the type of ammunition Bella Twin used to shoot the world record grizzly. Bella Twin is specifically recorded as reporting that she shot it with .22 Longs, not Shorts, not Long Rifles. I recall that into the 1960’s Longs were more expensive than shorts, but cheaper than Long Rifle ammunition. 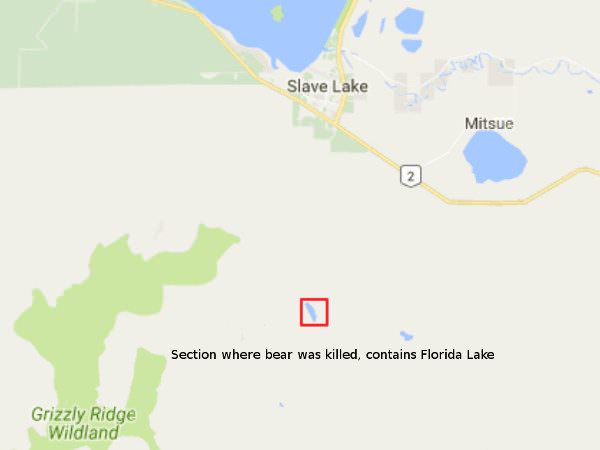 In Larry Loyie’s obituary in the Smoky River Express, Bella Twin is described as a tiny woman. This photograph suggest that she was under five feet tall. 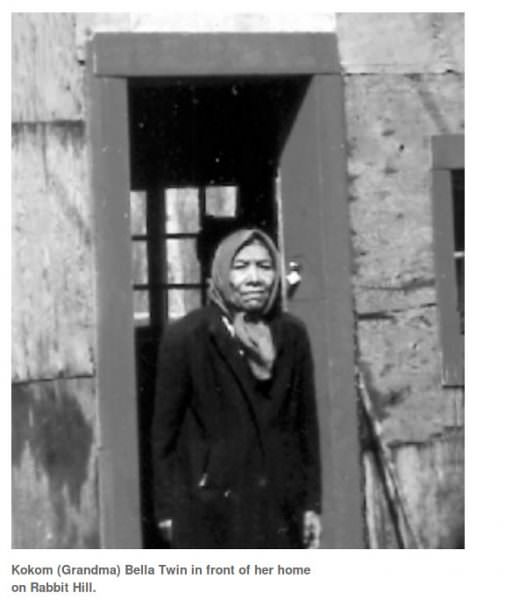 We know the date the bear was shot, because it is recorded on the top of the skull. Most written accounts only say it was the spring of 1953. It was on May 10th of that year.

Bella Twin was only a name for most of the time I knew of her. I wondered about this famous huntress for many years. Now we know that she was an expert trapper, hunter, and a crack shot.  She was a beloved grandmother who taught her grandchildren well and knew the Cree traditional folkways.  She lost one man and found another.  She was shrewd enough to parlay the world record grizzly into cash. She sold the skin and skull separately, and sold the old, beat up rifle as well.

Bella Twin, I salute you. I would have liked to know you. Born in the Canadian wilderness in 1890, your life stretched between worlds.

May your memory and deeds live long, told around many campfires. I will tell my grandchildren about you.

©2017 by Dean Weingarten: Permission to share is granted when this notice is included.

Dean Weingarten has been a peace officer, a military officer, was on the University of Wisconsin Pistol Team for four years, and was first certified to teach firearms safety in 1973. He taught the Arizona concealed carry course for fifteen years until the goal of constitutional carry was attained. He has degrees in meteorology and mining engineering, and recently retired from the Department of Defense after a 30 year career in Army Research, Development, Testing, and Evaluation.