Skip to content
A sword previously believed to be medieval has been identified as 5,000 years old Anatolian weapon. The short bronze sword was on display at the museum of San Lazzaro degli Armeni, a monastery on Saint Lazarus island in the Venetian Lagoon, when it was spotted by Vittoria Dall’Armellina, an expert in Ancient Near East weaponry.
She knew it wasn’t medieval, and that it looked very similar to swords found in the 4th millennium B.C. palatial complex of Arslantepe in Eastern Anatolia, Turkey, that are believed to be the oldest swords in the world.

All that can be traced of its history goes back to the second half of the 19th century. In the museum archives is a note in Armenian stating that a bronze sword was sent as a gift to Father Ghevond Alishan from art dealer Yervant Khorasandjian. Alishan was an Armenian Catholic priest, poet and historian who had been a member of the Mkhitarist Congregation, founder of the San Lazzaro monastery, since 1838.
The note says the sword was found in the town of Kavak, near Trebizond on the Black Sea. Father Alishan died in Venice in 1901, so the sword is believed to have been sent to Venice in the last couple of decades of the 19th century.
I’d like to see the note, too.
The stories this relic could tell! 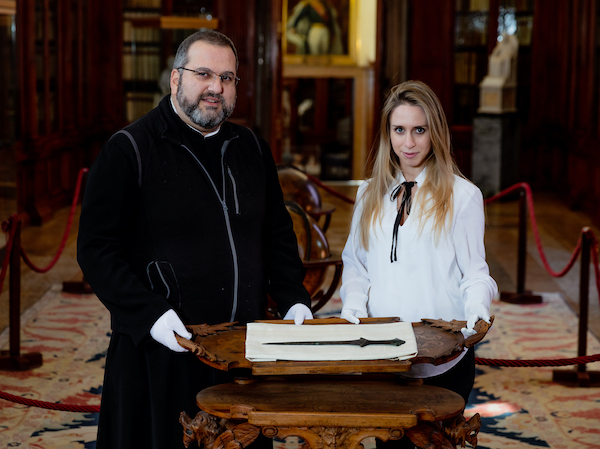 Dall’Armellina, who looks very intense in the picture above, had the sword analyzed, and the metal is arsenical bronze, a copper-arsenic alloy often found in copper ores that was used to make bronze before the stronger copper-tin alloy became the standard.
The ancient sword smiths got better with practice, clearly.  This one is very basic, and practical.

This piece of data and the strong resemblance to the twin swords of Arslantepe, retrieved in a well documented context, have allowed the experts to determine that the sword dates back to around the end of 4th and the beginning of the 3rd millennia B.C., as well as confirming its affinity to a very rare category of ancient weaponry.

Via the always good History Blog.